About us Message Committees Key Activities

Central Japan Economic Federation, known as “Chukeiren”, is a comprehensive economic organization covering a wide area including 5 prefectures in Central Japan. Chukeiren conducts surveys and studies on social and economic issues in and outside of Central Japan, compiles opinions of businesses in the area, and submits recommendations and engages in various activities to achieve goals.
Chukeiren works with the national and local governments as well as relevant agencies to execute a wide spectrum of projects, such as the “Opening of Chubu Centrair International Airport”, “Hosting the EXPO 2005 AICHI JAPAN”, “Establishment of Nanostructures Research Lab”, “Support to Attract and Host the 10th Meeting of the Conference of the Parties (COP10) to the Convention on Biological Diversity”, and “Establishment of Nagoya Innovator’s Garage”.

Message from the Chairman

Central Japan is a very attractive area blessed with a variety of resources. It is home to a number of global companies that epitomize Japanese “Monozukuri” manufacturing. Centrally located in Japan, the region’s transportation network provides convenient access to other parts of the country. The region also has a wealth of sightseeing resources and beautiful natural landscapes.

Today, we live in an era where people, goods, money, information, and technologies travel beyond borders and changes occur at great speed. The advancement of AI・IoT will only accelerate this trend. Anticipating these changes and capturing momentum is crucial to the continuous growth of the Japanese economy. Japan is also faced with pressing issues which affect the fabric of its society, such as an aging citizenry accelerated by the lower birth rate, a decreasing population, a population and various functions concentrated in the Tokyo metropolitan area, and the need for revitalization of local communities.

To overcome these challenges, there are three main areas in which Central Japan should take action; improvement of innovative power and creation of new industries via integration of different fields; vitalization of tourism and other local industries to increase earning power; and building communities which attract people and investment from around the world with an eye toward the operation of the planned Linear Chuo Shinkansen Line. In addition, developing human resources in the next generation to support these activities will be an indispensable foundation of the continuous growth of Central Japan.

Central Japan Economic Federation, widely known as “Chukeiren”, maintains its basic position that businesses should drive change to resolve various issues. Through the activities of its specialized committees, Chukeiren addresses these issues and compiles data on needs in local communities and industrial fields, which then informs the proposals and recommendations that are made to the central government and relevant agencies. Through these activities, we will continually take action in a timely manner to achieve the “Creation of a new Central Japan”.

Chukeiren works to create a more significant impact on our economy by combining forces in the business world.
I appreciate the support and cooperation of all Chukeiren members and look forward to welcoming new member enterprises, educational corporations, and organizations who will bring their energy and support to all of our activities.

In order to address issues on industry and economy in and outside of Central Japan, Chukeiren has established twelve committees to conduct surveys and studies, make proposals, and engage in various other activities. The committees also offer opportunities for Federation members to network and exchange information.

Conduct surveys and studies, submit proposals and requests, and engage in promotional activities in the area of economic policies, social systems, economic laws and regulations, etc.

Conduct surveys and studies, submit proposals and requests in the area of taxation reform and subsidies which would benefit industrial development and promotion.

Conduct surveys and studies, submit proposals and requests, and engage in activities to support technological advancement and promotion of leading-edge industries ‒ such as next-generation automobiles and aerospace ‒ and other industries.

Conduct activities to promote industrial use of colleges and public testing and research institutions.

Conduct surveys and studies, submit proposals and requests, and engage in promotional activities in the area of energy and environmental protection.

Conduct surveys and studies, submit proposals and requests, and engage in promotional activities to accelerate innovation and create new industries.

Conduct surveys and studies, submit proposals and requests, and engage in promotional activities to help develop and utilize new technologies, such as AI and IoT.

Conduct surveys and studies, submit proposals and requests, and engage in activities to promote industries which support the region, such as the service industry and indigenous industries including traditional crafts.

Conduct surveys and studies, submit proposals and requests, and engage in activities to promote tourism.

Conduct surveys and studies, submit proposals and requests, and engage in promotional activities in the area of community and infrastructure development with an eye toward a future super-mega region.

Submit proposals and requests, and engage in promotional activities in the area of decentralization, expansion of jurisdiction and collaboration amongst government agencies.

Conduct surveys and studies and submit proposals and requests to develop a comprehensive transportation network.

Conduct surveys and studies, submit proposals and requests, and engage in promotional activities in the area of disaster prevention and mitigation by the business communities.

Conduct surveys and studies, submit proposals and requests, and engage in activities to promote development of human resources which support the region and local industries.

Innovations in digital technologies occur at a fast pace, inter-city competitions grow fierce at the global level, the labor population is shrinking more quickly than the general population is; the social and industrial structures in Central Japan are changing dramatically. Any delay in adapting to these changes could turn Central Japan into a thing of the past. Chukeiren calls out for the need for a shared sense of urgency amongst industry, academia, and government as well as the need for a dynamic vision for Central Japan as one single region spreading beyond government frameworks. Hence, Chukeiren published “Future Vision of Central Japan” in March 2019.
Aiming to achieve the vision, Chukeiren executes various activities in (i) promoting the execution of demonstration projects and (ii) establishing a framework which accelerates wide-area community building. 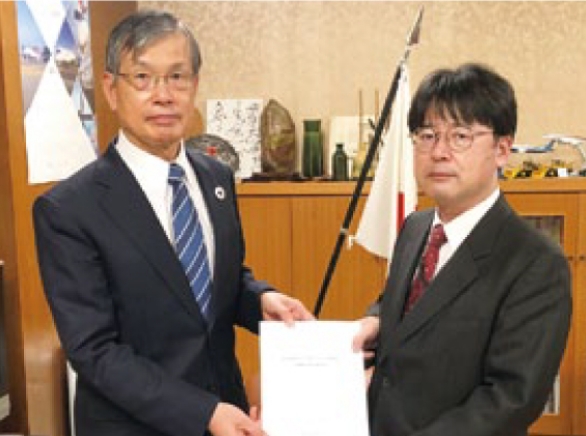 The industrial structure of the world is in a dramatic revolutionary period with rapid advancement in the development of technology and utilization of AI, IoT, robots, big data, etc., followed by the creation of a succession of new business models.
It is essential to enhance innovation further by combining different fields and to create new industries so that Central Japan, which has developed as a home to the manufacturing industry, can develop further without falling behind the trends of the times.
Chukeiren carries out activities in collaboration with organizations from industry, academia, and government for continuous improvement and enhancement of innovation systems in Central Japan.
In July 2019, Chukeiren worked with the City of Nagoya to launch “Nagoya Innovator’s Garage”. This project aims to provide a place for entrepreneurs and enterprises to cooperate in creating new businesses and industries.
Offering various events and programs throughout the year, Chukeiren aims to make Innovator’s Garage a platform which energizes and accelerates innovation in Central Japan. 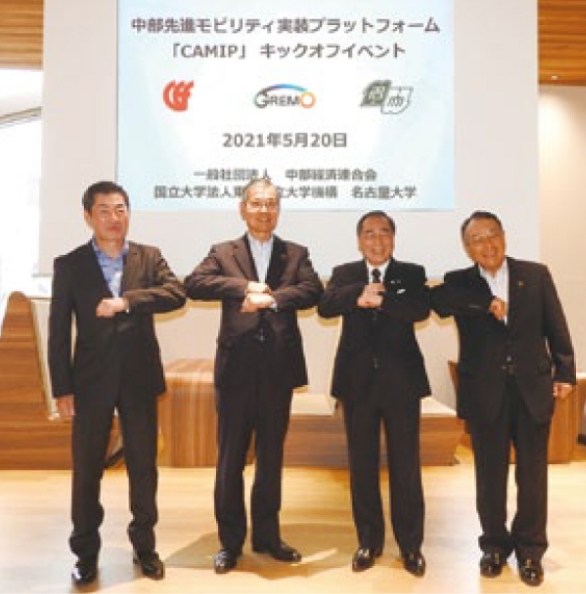 “Beyond the Border”, a training program for developing innovative human resources 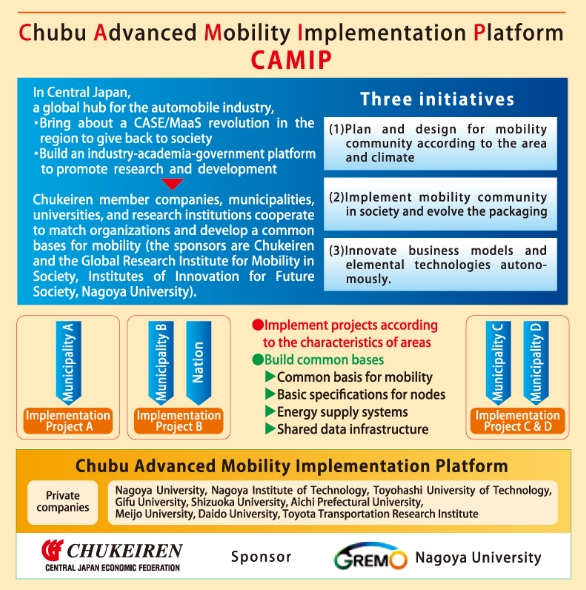 Chukeiren aims to engage in activities that produce concrete results to enhance the international competitiveness of industry in Central Japan.
Chukeiren holds a series of lectures with the latest international situations as a theme. Furthermore, in order to promote the globalization of Central Japan and improve the global competitiveness of its industries, Chukeiren prepares and provides recommendations to enhance the attractiveness of the region from the perspective of different groups of international residents in this region such as overseas investors, expatriates, and international students.
In our role as a liaison for foreign diplomatic offices, international related organizations, etc., Chukeiren makes efforts to conduct public relations activities to promote the attractiveness of Central Japan and to promote information exchange and enhance collaboration with foreign countries. 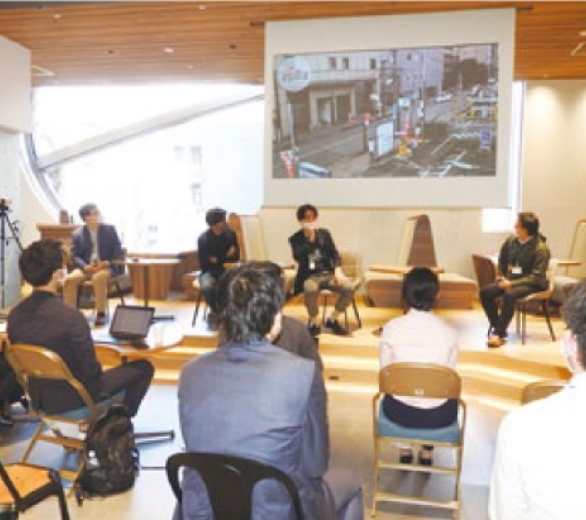 Being prepared for large-scale disasters like a Nankai Trough earthquake is an urgent issue to address. Chukeiren promotes disaster prevention and mitigation measures with communities to improve the disaster prevention and mitigation capabilities of companies and minimizes the negative impact on economic activities by promoting BCP and BCM* efforts and establishing a system to encourage self-help efforts for a wide range of business operators that comprise supply chains.
Chukeiren also participates actively in discussions of new disaster prevention measures promoted by the government when unforeseen phenomena are observed along the Nankai Trough.

The fight against global warming and other global efforts to protect our environment has grown more critical in recent years. Chukeiren watches the trends in national energy and environmental policies closely and publishes its opinions and recommendations, as appropriate, which satisfy needs for both environmental protection and economic growth. 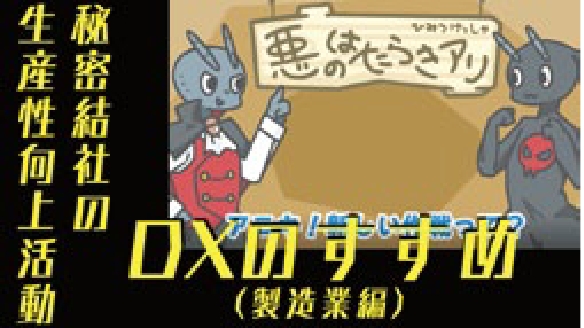 Chukeiren is working on deregulation and establishment of systems for development and technology improvement of leading industries, such as the next-generation automobile industry and aerospace industry.

Chukeiren is working on improvement of the environments of social systems (infrastructure, information communication, systems, etc.) for links in urban development to promote the spread of future next-generation vehicle automatic driving and ITS*, electric vehicles and fuel-cell vehicles, and car sharing and mobility segregation. 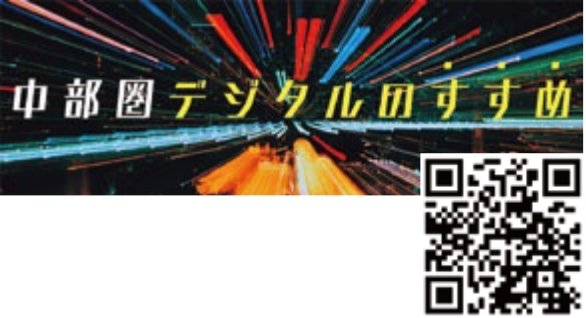 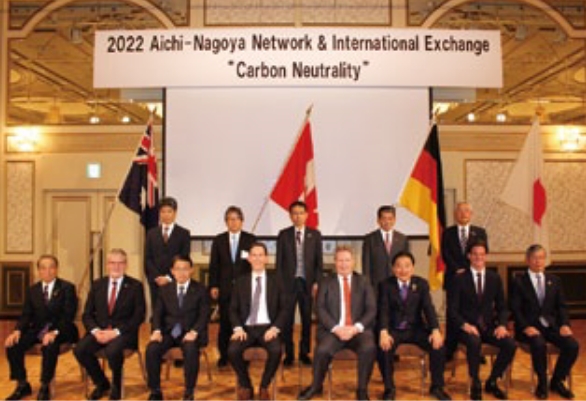 To support the sustainable development of Central Japan, it is crucial to cultivate human resources with timeless fundamental skills who can think and act for themselves.
To execute its proposal described in “Cultivation of Human Resources to Support the Future of Central Japan” (published in December 2017), Chukeiren promotes collaborative efforts with industry, academia, and government. One such example is the program “Pools of Corporations and Human Resources”, where member corporations dispatch their representatives as lecturers to classes at member universities.
In addition, Chukeiren conducts surveys and studies in subjects such as the diversity in human resources and the reformation in working practices to meet the needs of a depopulating society. 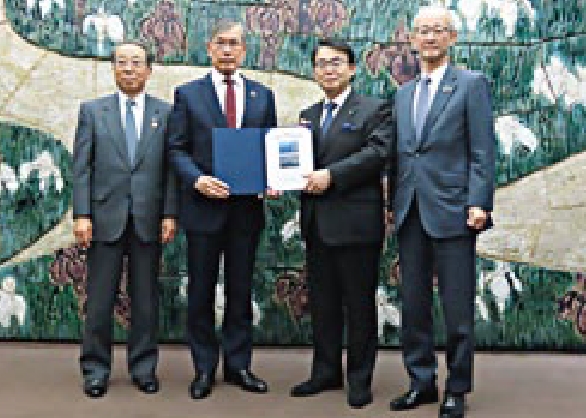 Dispatched instructor lectures in a freshman class at a member university

Vibrant local industries play a crucial role in addressing one of the most important issues facing Japan ‒ the revitalization of regional communities.
To achieve this goal, Chukeiren encourages dialogue that takes place in various parts of Central Japan ‒ such as the Regional Industry Vitalization Committee and round-table conferences by regional members ‒ and liaises committees of different domains. Chukeiren also executes various efforts for stronger wide-area collaborations. Some such examples are making recommendations and requests in the business succession of SMEs, regulatory and systemic reforms, IT-based productivity enhancement, and promotion of traditional crafts in cooperation with producers and relevant parties. 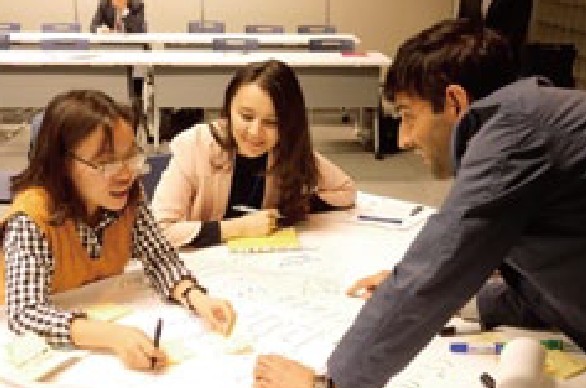 Central Japan has a high potential in tourism, with its geographical advantages, abundance of tourism resources, and excellent network of land, maritime, and air transport.
Acting as a DMO, the Central Japan Tourism Association (CEO: Chairman of Chukeiren) supports activities to vitalize the tourism industry and local economies in 9 prefectures in the Chubu and Hokuriku Regions. Chukeiren supports Central Japan Tourism Association in their marketing-based strategic promotional activities and efforts to refine resources in the region. This is how Chukeiren extends its efforts beyond administrative boundaries and helps stimulate local tourism. 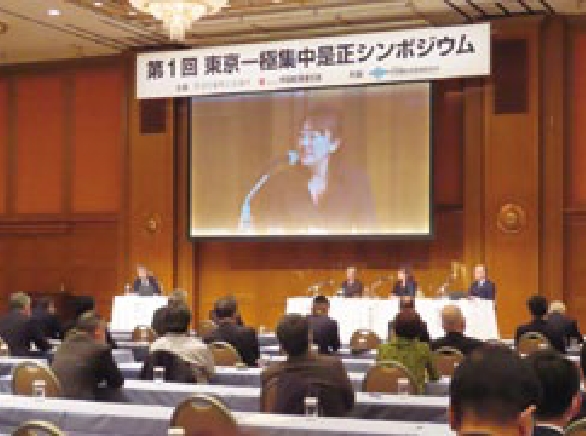 International students exchanging opinions on how to attract inbound tourists

Eying further growth of Central Japan, Chukeiren is working on promoting improvements of port facilities, such as construction of terminals for container vessels and cruise ships and enhancement of disaster protection functions through construction and renovation of tide embankments in the Port of Nagoya, which is Japanʼs top port in terms of cargo volume, as well as in major ports such as Mikawa, Yokkaichi, and Shimizu. 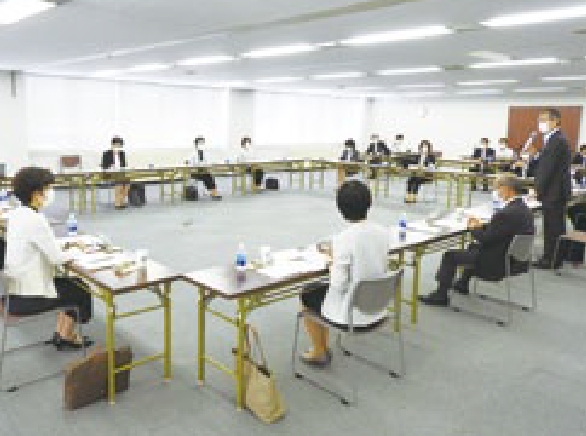 With the opening of a new terminal for LCCs, Chubu Centrair International Airport anticipates increased growth in demand 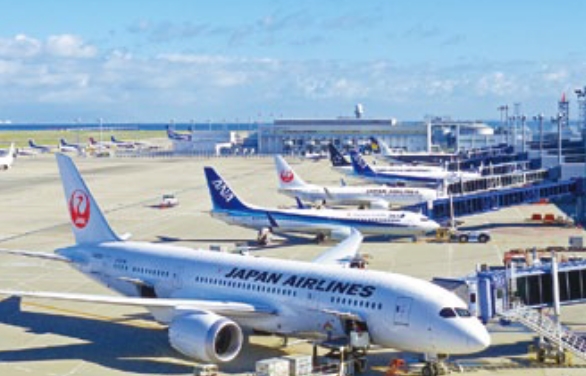 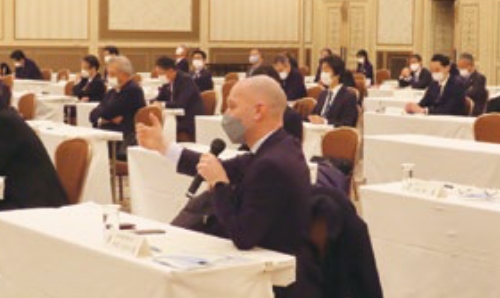 Take the Subway Higashiyama Line or the Meijo Line to Sakae Station. Go out of Exit #5 and go east 50m.